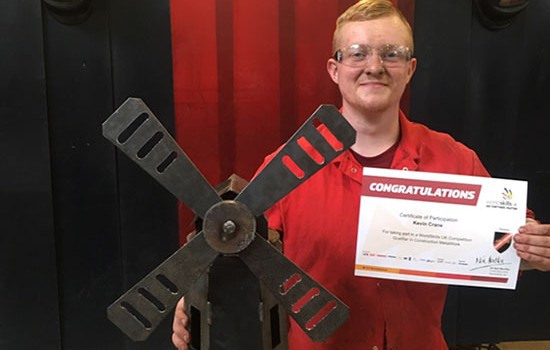 We are thrilled to announce that Kevin Crane, a Welding Apprentice at our Durham depot, has entered the Construction Metalwork (Fab & Weld) 2019 competition.

Kevin was first introduced to MGF in January 2018 at our Durham open day and has since been increasing his skillset and furthering his knowledge as a welder.

During a past conversation with Kevin, he stated;

“I always knew I wanted to be a welder but attending an open day with my college at MGF solidified this and I applied as an apprentice. I’m excited to stay here for a career after my apprenticeship.”

His determination to learn and become a skilled welder and fabricator influenced Kevin to enter and take part in the nationwide competition. Along with his desire to learn, Kevin has a good engineering ability and sees professional and personal development as very important.

‘Kevin has been working with us since February 2018. In this time Kevin has shown a willingness and keenness to learn and develop in his role. This has been made evident of late through Kevin’s performance in what has been challenging times in our workshop. In this time Kevin has shown his value to our team through his individual performance – we hope to reward this through our continued commitment to provide him with tools and environment in which he can thrive.’

The Construction Metalwork (Fab & Weld) is a competition that is organised by World Skills UK with partners SEMTA and The Welding Institute supported by the Association for Welding, Fabrication, Training and Education. WorldSkills UK are a set of competitions that run each year in over 70 skills across the UK.

With 15 colleges around the UK taking part, there are 62 competitors, including Kevin.

As for the winners, the top ten scoring fabrications will be invited to the skills show to take part in the final in November 2019 at the NEC in Birmingham: a 4-day event in which the prizes include a gold, silver or bronze medal.

Any participants who are eligible may be selected for training for squad selection for team Great Britain. The final of World Skills UK is in held in Shanghai, 2020.

We wish Kevin all the best throughout the competition!

If you want to hear more about the competition, take a look at the The Welding Institute website.