From the 20th -22nd May 2014 MGF Trench Construction will be joining the Civil Engineering community at the largest infrastructure exhibition held in the UK this year, the Civil Infrastructure and Technology Exhibition, CITE, at Earls Court 2 in London. 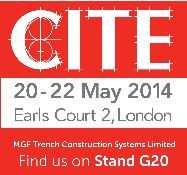 In December 2013, the government issued the new National Infrastructure Plan, containing information on more than £377bn of planned public and private sector infrastructure investment, alongside the Infrastructure Pipeline.

A total of 646 projects are now included in The National Infrastructure Plan (NIP) – including the government’s top 40 priority infrastructure projects including Nuclear Energy, major Highways Agency projects, Smart Meters, Mersey Gateway Bridge, the Thames Tideway Tunnel and many more. The plan has been described by Danny Alexander, Chief Secretary to the Treasury, as “a blueprint for Britain” that would lead to “long-term sustainable growth”.

MGF will be showcasing our digital engineering expertise in the provision of value driven, risk managed temporary works design of our in house manufactured excavation support systems that contribute to so many major projects for UK infrastructure.