Congratulations to our under-graduate design engineer, Pablo Gonzalez Garcia, who was recently placed within the UK’s top 10 in the TARGETjobs Undergraduate of the Year Awards 2015.

Competing within the Construction, Engineering and Design category, Pablo successfully qualified for the top 40 after passing various psychometric tests. He then fought off competition to secure a place in the short-listed final 20 by answering questions about the construction industry which were posed by the award sponsors, Laing O Rourke. Those short-listed were then invited to an assessment day with Laing O Rourke, during which they took part in group assessments and individual interviews before the top 10 contenders for the award were announced and invited to the TARGETjobs Undergraduate of the Year Awards 2015 ceremony in London. 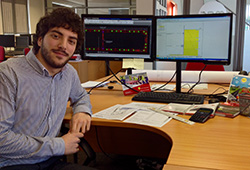 Pablo commented “I have learned a great deal and am extremely proud to have been chosen in the top 10 along with some exceptional people. I really didn’t expect to be selected and overall it has been an exciting and rewarding experience”.

Pablo joined the Faculty of Engineering and Science at the University of Greenwich, London in 2011 after finishing at The British School of Aragon in Spain. He later joined the MGF team for a year-long work placement in 2014 and will commence his final year of University studies this September 2015.

MGF’s Design Director, David Taberner, said “We are extremely pleased that Pablo had been chosen as a finalist in the Undergraduate of the Year Awards. During his time on placement at MGF he has demonstrated great commitment to both his studies and placement and has enthusiastically approached all aspects of working within our Design Engineering Team.”

The TARGETjobs Undergraduate of the Year Awards launched in 2009 and now features 12 prestigious awards. The 2015 competition was entered by more than 3500 students from over 130 different universities. Prizes are available for winners in a number of categories and awards are sponsored by commercial partners.

At MGF we recognise that our ability to deliver exceptional customer service is dependent on an engaged work force which is why we pride ourselves on recruiting talented individuals and investing in their long-term learning and development. We are committed to becoming an employer of choice and will continue to build on our partnerships with Universities and their placement schemes.

To find out more about the TARGETjobs Undergraduate of the Year Awards visit www.undergraduateoftheyear.com